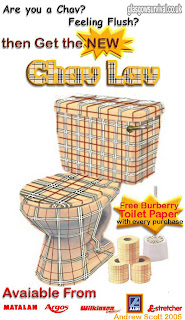 Chavs, what does this exactly mean? Well the only thing I know is that this is a stereotype of the particular minority. You know the type, School drop outs always in town when they should be in School. Well I haven’t got anything against them, it’s their decision if they rather spend their time walking around in town than having a education what can we do about it. But society in general has this type of person, aka Chav being rude, arrogant, and 13 years old though he thinks he is an 8-foot tall rugby player. Always is tracksuit, with around three phones dangling around their necks. They also have a mothers meeting around Mac Donald’s! What’s that about???.

This site is hilarious it’s the urban dictionary. For people who need some useful information on how to spot a chav.

http://www.urbandictionary.com/define.php?term=chav
Posted by dhillon at 19:26